There are a lot of options available when it comes to lubricants. We have mineral based (oil that comes from the ground), blends, a combination of mineral and synthetic, and full synthetic. We use these lubricants in engines, transmissions, gear cases, and hydraulics.

Mineral based oils are the minimum standard products to get us through a warranty period. A great deal of additives must be used in these lubricants to meet the requirements mandated by vehicle and equipment manufactures. With warranties getting longer, lubricants have to be improved.

The American Petroleum Institute (API) began to certify motor oil in the early sixties. There has been continual progress in testing and standards for lubricants since that time. Why? To prevent component failure during warranty. The lubricants specified by manufactures do not protect well in extreme conditions; conditions such as cold starts, extreme heat, or with heavy loads such as RV applications. The manufactures rarely concern themselves with these conditions when asking oil companies to design lubricants. These conditions can lead to shortened component life or even catastrophic failure.Enter

General Motors, Ford, and Chrysler, just to name a few, has synthetic lubricant requirements for some components of the vehicles that they produce. Corvette was the first U.S. mass-produced auto to require the use of synthetic engine oil to provide better protection. By using synthetics these manufacturers will not have to provide expensive repair work. Synthetics have been available for years, and most are API certified for warranty use.

Not all synthetic lubricants are created equal. The key is the base stock. The majority of synthetics contain low cost ester stocks and an additive package to support this less costly base stock.

It is rare to find a synthetic oil manufacturer that uses state of the art polyester based stocks. These ultimate base stocks are the basis of jet engine lubricants.

Unraveling the Mysteries of Lubrication

As we grow older we should be getting smarter but with all the new technology today it is hard to keep up. Are you confused by the oil companies multi-million dollar advertising campaigns? What about synthetic oils and additives? Are they worth it? Do they Work? The answer lies in understanding how lubrication works. Bypass all the hype and get scientific.

Characteristics and Properties of Oil

Viscosity, or weight, is another criteria for judging the service rating of oil. Simply put, viscosity is the oil's resistance to flow or motion. Viscosity varies under different temperatures and is vital for maintaining a lubricant film between moving parts. Viscosity plays a role in an engine's cold-cranking ability, the movement of gears, meeting load capacities, heat-up of critical engine parts, and the oil consumption rate.

A common misconception is that oil thickens to achieve a 40-weight status. In fact, the oil simply maintains the same flow rate, film strength and shear rating as a straight 40-weight oil would offer at higher temperatures. The call for a straight 40-, 50- or 60-weight oil in a racing engine is largely due to greater bearing clearances, a high-volume/pressure oil pump and excessive stresses and load. This same oil in a modern OEM production engine would cause sever damage, such as spinning rod bearings during engine cranking in sub-zero weather. 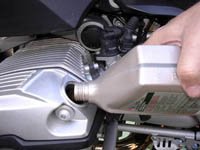 In addition to these classifications, some oils offer Energy Conserving labels, which indicate the product's ability to improve engine performance and fuel efficiency. Quality synthetic oil meets these category tests and exceeds petroleum/mineral based oil standards by a wide margin. Oil properties also include:

Anti-Foam Protection: Foam can lead to oxidation and the inability of oil to create a protective film.

Biodegradable Base Stocks: Non-petroleum base stocks made from canola oil, rapeseed oil or sunflower oil.

Film Strength: The strength of an oil, its ability to keep metal pieces apart (like the coating between a bearing and crankshaft journal) is critical to engine survival.

Flash Points: The lowest temperature at which vaporized oil will flash when exposed to high heat for flame.

Lubricity: The slipperiness or lubricity of oils determines its ability to reach parts and stay in place to prevent wear.

Polarity: Dipole character of motor oils allows them to adhere to parts. Improved polarity results from use of fatty acids, esters, and ethers, which raise adhesion levels, reduce friction, and add to load capacity.

Pour Points: An oil's ability to pour at ultra-low temperatures solely by gravity.

Resistance to Combustion Chamber Deposits: An oil's resistance to finding its way into the combustion chamber where harmful deposits can form.

Shear—Oil Lubricating Quality: Depends on sheer stability, the ability of oil to remain stable, intact, and functional under load.

Synthetic Hydrocarbons: Man-made hydrocarbon molecules such as polyalphaolefins and polybutenes.

Total Base Number (TBN): A classification of an oil's reserve alkalinity. Its ability to reduce the acids that form as a result of fuel sulfur content, high heat, condensation, and combustion processes. Acids formed in an engine's crankcase can etch and ruin bearings.