BatteryStuff.com!
Knowledge Base : Tutorials : Solar Articles : Solar Info: The Down Low on Everything Up High

Solar Info: The Down Low on Everything Up High 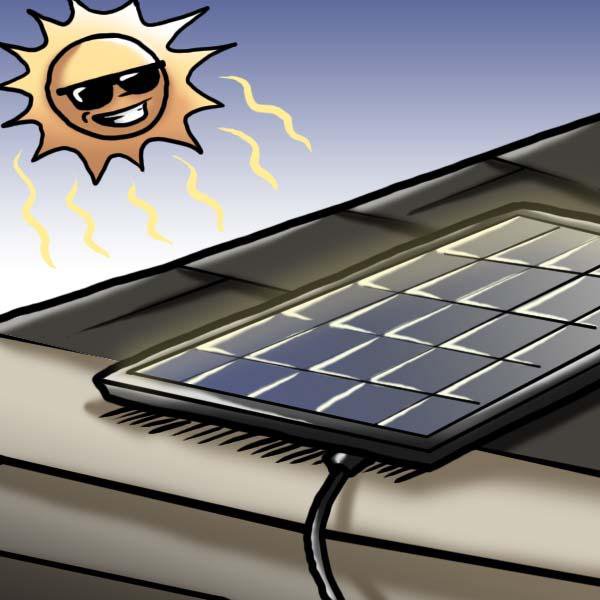 Rain or shine we get a huge number of calls about solar power each day. We’ll attempt to answer the questions asked most often so we can save you a phone call.

Before we get started, you should know that solar power is not the cure-all for replacing spent energy. For example, some people are trying to recharge batteries for a trolling motor, boat, RV, house, electric scooter, backwoods cabin, etc., and they want it done in very short time, usually in just a few days. Assume you take a discharged 100-amp hour battery and charge it with a 30-watt solar panel under ideal summertime light conditions. After a full week, the battery will be just about fully charged. Using this example, you can see that it will take at least 100 watts of solar power to recharge a 100-amp hour battery in a few days.

Also, keep in mind that it takes direct sunshine on the surface of the panel to produce the maximum-rated power of a solar panel. Conditions such as an overcast sky, shadows, improper mounting angle, equatorial direction or short winter days will reduce the actual solar panel output to below the rated values.

Most solar chargers are designed for 12 VDC, but we do have limited availability on a 24-volt panel. Typically, when 24 volts or greater is needed, solar panels may be wired in series, or we can special order solar panels that are made to deliver more DC Volts such as 24V, 36V, 48V etc.

Anytime you use a panel that is over 5 watts rated output, we recommend using a solar charge controller. Actually, a charge controller is a good idea in a majority of applications, as it can provide several benefits such as preventing overcharge, improving charge quality, and preventing battery discharge in low or no-light conditions. Some solar panels are made with blocking diodes pre-installed that prevent battery discharge during low or no-light conditions. In most cases where a 6-watt or larger solar panel is installed, the use of a charger controller is highly recommended. In a nutshell, a solar charge controller acts like an on and off switch, allowing power to pass when the battery needs it and cutting it off when the battery is fully charged. Something to be aware of when selecting a controller is that they are typically rated in amps, while photovoltaic panels are typically rated in watts. That means a solar charge controller such as the Morning Star SS6L, 6-amp controller will work with nearly every panel we sell, right up to about 70 watts.

HOW DO I FIGURE SOLAR PANEL SIZE

The first thing to remember about solar power is that it is all a matter of numbers. The power you require vs. the power the panel can put out. Before you can even get started when purchasing a panel, you need to know how many amp hours or watts you’ll need to produce in a set period of time. This figure could be measured in hours or days. Since there are 24 hours in a day, we suggest you use that as a baseline. First, determine your total electrical consumption in that time period. Then figure the amount of direct sunlight the solar panel will receive in that time period and come up with a total amount of watt hours needed. You should always err on the side of caution and over-estimate your power needs. Typically we see an average of 4 hours of usable sunlight in the winter, and 6 hours of usable sunlight in summer. Granted, there are exceptions to these averages, but erring on the side of caution creates a more reliable solar system. These averages also help compensate for variables like shade, clouds, panel angle, etc. Once you have a good handle on your power requirements, I suggest you go to our Solar Calculator.

Solar panel ratings are calculated in bright direct sunlight. Conditions such as indirect sunlight, overcast and partial shade conditions will decrease the output. We always recommend over-sizing the size of your solar array, as these conditions occur often. Also, remember that the length of daylight in summer vs. winter can make an impact.

One of the biggest errors commonly seen is when a solar array is designed in summer using summer daylight hours, but then it’s also used in the winter. The first complaint is often related to the batteries no longer holding up under load. This is a gradual process that begins when you lose daylight hours, and you start taking the battery pack beyond a 50% depth of discharge. When this happens, the batteries start to sulfate at a much quicker rate, and begin to no longer hold under load. As you can imagine, this is an expensive mistake! The solution generally involves more panels and new batteries with a higher Amp/Hr reserve. Therefore, we advise our customers to be conservative when accounting for daylight hours. Also, if you plan to utilize a solar array year-round, then you need to factor in your daily solar input for winter.

OPERATING A DEVICE DIRECTLY FROM A SOLAR PANEL BATTERY CHARGER 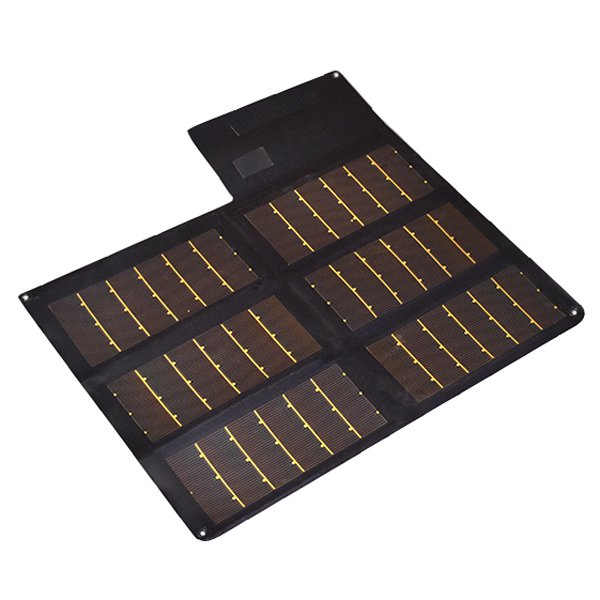 We carry several foldable/portable solar panels for backpacking that come with a female cigarette lighter adapter. This adapter allows you to power 12v accessories that commonly use a 12v DC plug. In order to connect directly to a panel, the device cannot be sensitive to voltage variation—otherwise they may shut down. To solve this problem, it’s best to use a small battery as a storage vessel for energy that will provide constant source of stable, reliable power. To do this, we recommend using a solar charge controller, Y-connector with a battery inline on one leg, and the female cigarette socket on the other leg.

Nearly all solar panels are designed for outdoor installation, as this is where they will receive the best, most direct exposure to sunlight. Remember that anything less than that will cause the panel to produce less than its full-rated power.

DO I HAVE TO MAINTAIN SOLAR PANELS

A periodic inspection to remove dirt, debris and check electrical connections is all that is needed. Keeping the panel clear of snow and debris will allow for better results.

HOW LONG DO SOLAR PANELS LAST

Performance from a solar panel will vary, but in most cases guaranteed power output life expectancy is between 3 and 25 years. This guaranteed life expectancy rating is usually 80% of the published rating of the solar panel. Of course, this will vary from manufacturer to manufacturer, and as always, you typically get what you pay for. Watch out for those cheap panels made in Paki-china-nam-istan.

USE OF A POWER INVERTER 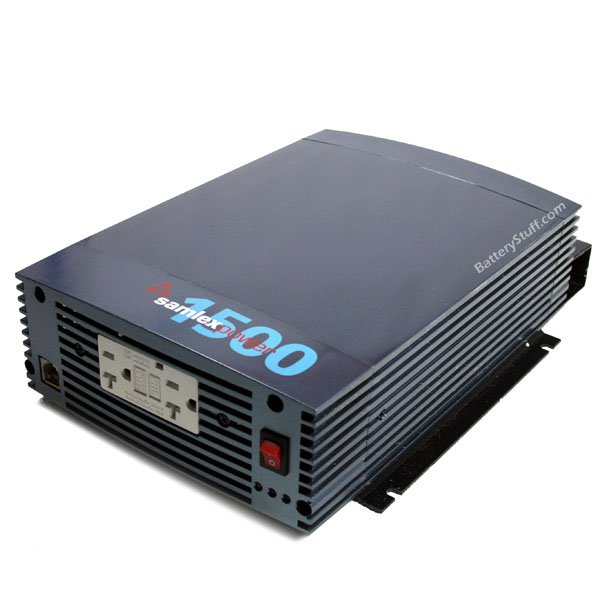 Many folks use a DC to AC power inverter to convert 12 VDC to 110 VAC. Since they change power from one form to another, inverters are power-gobbling monsters and should be avoided when possible. If you have a choice of a 12-volt, DC-powered device or 110-volt AC device, go with the 12-volt DC device. There are DC devices on the market that either step down or step up DC power, and these also use significantly more power.

FORMULA DC to AC via an Inverter

This “rule of thumb” is intended as a general guide for estimating the DC amps required operating a DC to AC power inverter. Since the calculations yield approximate values, an appropriate safety factor should be considered when designing and specifying system components, such as wire, size and length. This basically means “oversize your system.”

Example: How many DC amps will a 12-volt inverter require to operate three 500-watt quartz lights, or a 1500-watt electric heater?

This is the DC current the inverter will use to operate the 1500-watt load. Note: If these 150 amps are drawn from the battery for one hour, 150 amp hours of battery power will be used.

To support 150 amp hours of battery power, 300 amps of battery capacity should be used for maximum battery life and performance.

Example: How many DC amps will a 24-volt inverter require to operate three 500-watt quartz lights, or a 1500-watt electric heater?

This is the DC current the inverter will use to operate the 1500-watt load. Note: If these 75 amps are drawn from the battery for one hour, 75 amp hours of battery power will be used.

To support 75 amp hours of battery power, 150 amps of battery capacity should be used for maximum battery life and performance.

Ready to harness the power of the sun? Shop for a solar charger and accessories.

Whether you need a solar battery charger for boat, solar trickle charger for car battery, or a solar ac charger, we have the right chargers for any application.