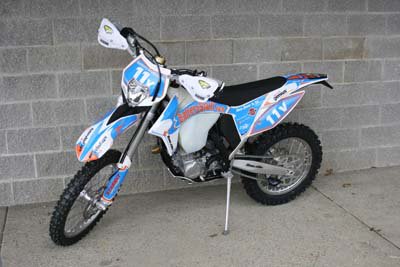 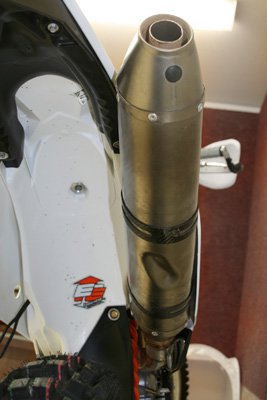 - Scotts over the bars damper

I have had the bike for about 1 month, but due to a previous injury was not able to ride until this last weekend. For the record, I was NOT on a motorcycle when I was injured. In fact I just ‘left’ the bike several milliseconds before I was ruthlessly attacked by the ground...details are not important. Anyways, I had plenty of time to fuss and fawn over the bike while it sat prettily in my shop. Fit and finish are what you would expect from KTM, which is just as good or better than anything else out there right now. Comparing this to my 09 Husaberg, I have a nagging thought that took me a few days to put to words, and can now sum up simply.  The Husaberg was clearly designed by engineers. Yes, it was a great bike, and until now my favorite (despite the bitter parting we had at the end) to ride. Definitely designed to perform well, but without thought of actually working on the thing. 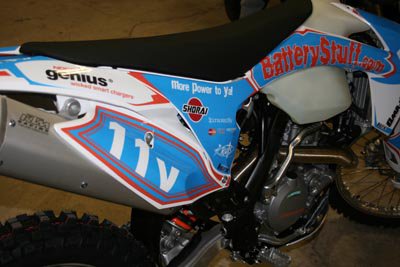 The 2012 KTM is a different bag. They seem to have taken the best from the Husaberg as far as performance, improved upon it even, and added in the bonus of a very service friendly design. The only flaw I have found so far is the rear shock adjustment screw is hidden behind the plastic side cover. Clearly, someone from Husaberg was tasked to design that part.

Ok, Ok, what about the ride? How does the bike perform? Well, anyone that knows me understands my system of theft prevention theory. I ride the holy hello out of my bikes, and they quickly show it. While I do take great mechanical care of my toys, they are the polar opposite of trailer queens. Built to be ridden, and by golly, I will ride them. So, where were we? Oh, the ride. Right.  Ride conditions were just about as perfect as one could expect from a December day. Fog in the valleys, about 31F. Up higher, clear blue skies with temperatures up near 50F. It had not rained in about 2 weeks and the soil above the fog and frost was perfect. Below that, it was sketchy. This offered the best test conditions, simulating both summer and winter riding mere minutes apart.

The Ergos: The first thing that I notice is the bike seems a bit tall. Maybe I am shrinking, but touching the ground is done on my toe tips. But hey, touching is overrated. The bike is also harder to start than I think it should be. Once warm it fires up with a flick of the button, but I found that I have to use the fast idle knob on the throttle body to start it up cold, and even still a bit of cranking happens before it lights off. My 09 Husaberg always started without the fast idle knob, and always about 1.5 revolutions of the motor. I suspect the difference is in the mapping, perhaps the Husaberg had to give away a little in performance for reliable starting? (no kick start). Just a theory. If all else fails, I can always shop around for motorcycle batteries with more cranking power. Then again, I do have a Shorai battery in there right now.

The Motor: Once warm, the motor is amazing. The mapping is spot on, delivering that ‘connected directly to the rear tire feel’ associated with fuel injection. Smooth. So very smooth! Wow, this thing pulls! I briefly flirted with the idea of getting the 500, but after riding this, I believe that the 500 would’ve been gratuitous overkill. As a point of reference, I own a KTM 300 XC-W(with Christini AWD) and I cannot say how glad I am to be back on a 4 stroke! I really wanted to love the 300, but as a life long 4 stroker, I just never got comfortable on it, and am left with the feeling that I have to work 2x as hard on the 2 stroke to go almost as fast as I can on the 4 stroke. If you are like me, and have a ‘lazy’ riding style, the 450 will reward you in effort saved. I was going to try to swing keeping the 2 stroke, but now…anyone want a 300? 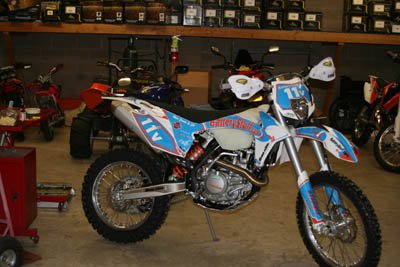 I never did ride the new 450 with the stock exhaust, as I had a Akra can sitting in my shop just dying to be installed. On the ride, I did notice a very small bit of popping on deceleration, but not enough that I feel I would have any need to make changes.  Again, this motor is just so smooth on it’s power delivery. It pulls hard right off the bottom, and feels like a very linear pull right to the end. Before the end of my 50 mile loop, I was pulling hills in 3rd gear that I usually have done in second.  Engine braking is definitely lighter than any 4 stroke I have ridden before. As a committed 4 stroker, I am withholding my opinion on that for further testing…

The Suspension: First a disclaimer. I am a suspension idjut. I’ve got a buddy that swears he can feel the difference when he makes a single clicker adjustment to just one fork leg. Me? Not so much. I’ve always been better at adjusting my riding style to fit the suspension under me, than making adjustments that leave me feeling like I accomplished something.  With that said, my first impression was that the suspension was a bit soft, but after riding it thru a bunch of single track and some fire roads, my second though was not so much too soft, but more along the lines of  super smooth.  I guess I will have to withhold judgment on this until after the suspenders have been broken in, and adjustments are made. My completely uneducated guess is that it is going to be very good in slow and mid speed stuff, but suffer a bit in high speed desert and whoop sections. I did burn a few laps on a freshly minted private motocross track at the end of the day, and was pleasantly surprised with how this overly pliant feeling suspension did not bottom hard or ‘slap’ on flat landings. Again, time will tell on this one.

The Verdict: I think I’m gonna keep ‘er. Well, OK, my budget already dictates that this bike is going to be around for a couple years minimum anyways, but I believe that our relationship will be far more than a cordial one. I think we will get along famously.

So I’ve now got just over 300 miles on the bike, so I figure now is about as good a time as any to write a little update. Since my original posting I have ridden the bike in every condition we get locally in Southern Oregon. Wet clay, dry clay, rain, snow, decomposed granite, rock, etc. The only missing terrain right now is desert. (We’ll get back to that.)   This bike is a real pleaser Everything about it just exudes confidence. Because this bike is so smooth, it makes me feel faster. Maybe I am, maybe I am not, but my seat of the pants-o-meter tells me that I have picked up a bit of steam. And if my pants-o-meter is pegged, that is all that really matters.

I can now also address a few issues I had written about in the original article.

Plastic Design: I had stated originally how the plastic covered the adjust screw for the rear shock. What I did not realize is that the dealer installed plastic off an ’11 to get me my requested all white bike. The shock location on the ’11 and ’12 are different, so that is what caused the issue. A few minutes with a drill and a file, and all is good.

The Motor: Now that the motor is broken in, starting has become a non issue. It fires up as fast as any other fuel injected 4 stroke, comparable to my 09 Husaberg. I no longer need to pull the cold start knob on cold mornings.

The Suspension: Smooth. A bit soft. Goes where you point it. Responds well to clicker adjustments. I will ride it as is for awhile, but it will probably get a re-spring in the future. As stated earlier, I have not ridden it in the desert yet, so I am unsure how it will respond to miles of whoops. My guess is that will be a weak point, but we will see in a month or so when I run the China Hat ISDE in eastern Oregon.

In a word(or two) I am very happy with this bike. My friends that have thrown a leg over have been pretty impressed. It has supplanted my previous favorite 09 Husaberg as my favorite ride. It is everything I wanted and expected in a bike, and I am gonna keep ‘er.

3 people commented,
This article is rated out of 5
Read blog in RSS news reader with RSS. Read blog using Feedly