Battery Myth | Can a Battery ‘Reverse’ its Polarity?

Actually, yes, but not without help. Reversing the polarity on a battery can happen only a couple of ways. 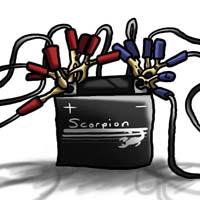 If you have a wet cell battery are filling it for the first time, and are using an old style battery charger, non smart charger, and short the terminals while you are filling it, yes it is possible to hook up the charger backward and reverse charge it. You would not necessarily notice a spark because the battery gains voltage as the battery is being filled, and if it is being charged while you are filling it, the short would not be a strong enough discharge to create a spark.  If that was to happen, and a charger was hooked on backwards, or if it was installed in a kick start vehicle and hooked up backwards, then you can end up with a battery that has been charged, but backwards.  Notice there are a lot of ‘ands’ in the above scenario. This situation is possible, but not very likely.

The second possibility is reversing polarity after the activation process. This is also rare, as it requires a sequence of errors to be present after the installation of the battery. The only way for this to happen would be to completely discharge the battery, either by leaving the key on, or by an unnoticed dead short that completely dissipated the charge over a few days.  After that happened it would appear to be a dead battery.

Remember, a completely discharged battery is nothing more than an empty vessel.  In order to gain a negative charge, it would then necessitate being hooked up backwards, and charged that way. So the real question here is: how can a battery reverse polarity after it has been installed?  That same previously discharged battery would then be vulnerable to reverse charging, either by connecting the battery charger backwards, or by a charging system that reversed polarity (very rare, but still possible).

So let me restate: The only way for a battery that has a positive charge, to reverse itself, is for the battery to be completely discharged, and then reversed charged.  We have seen this happen a couple of times, and it would be considered the more common of these rare situations.

For all intents and purposes, the battery will be ruined.  You could technically charge it up, negatively, and continue to use it, but your plates are designed with the positive plates being lead dioxide, and the negative being composed of a sponge lead, which would now be reversed.  Because the reversed battery is no longer formatted correctly, it will only work to a limited degree. The fact of the matter is, a lead acid battery cannot reverse its own polarity without an external stimulus. It is just not possible.

Modified on October 31, 2019 a 8:48 am
Battery Myth | Can a Battery ‘Reverse’ its Polarity?
Tagged with battery, tutorial, chargers, myth, charge

21 people commented,
This article is rated out of 5
Read blog in RSS news reader with RSS. Read blog using Feedly