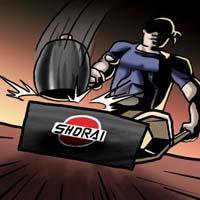 While there are other companies now offering Lithium-Iron based powersports batteries, all except Shorai use cylindrical cells originally made for power tool applications. Such cells are inferior to Shorai Prismatic LFX, for several reasons.

First, the cylindrical cells come only in one size, so that the possible shapes and sizes of the starter batteries they make are very limited. Because of this, it will be hard to fit the batteries into many applications. Shorai’s prismatic cells, on the other hand, are rectangular packages which can be freely designed and sized according to the requirements of the battery case. As such, Shorai offers perfect drop-in fit in many vehicles and - if the LFX is slightly smaller in one dimension - high-density, adhesive-backed foam shims are included in the package. These can be applied to the battery box in a few minutes, to insure a snug fit. No saws, cutting torches, or duct tape required!

Second is the pedigree. While power-tool cells may crank a vehicle successfully, they were not originally intended for the high current discharges in starter systems. Because they are being used out of original design, they will loose capacity every time they are used this way. By contrast, Shorai batteries are the result of years of research and development, and are designed and produced in a tightly controlled factory. Shorai LFX have been used in some of the most extreme high-current projects in the world, including autonomous aircraft, boats, and submarines, electromagnetic rail gun research, and more. In short, the have been designed to be the perfect powersports starter batteries, with the longest lifespan and highest performance in the industry.

The final reason is one of quality control. Every Shorai battery is built in an ISO 9000:2008 certified factory. All the primary cell ingredients are sourced from Japan, which allows production of the most consistent and reliable cells. Then there is individual cell quality control and matching over a six-week period, for every cell made. This test period is two to four times longer than typical. This testing is unmatched and assures the end consumer that they are getting a high quality product every time.

Why are Shorai batteries priced below other lithium starter batteries?

Shorai LFX batteries are produced exclusively in a dedicated factory, in large volume, by an experienced production team. The resulting high yields reduces costs, and the factory-direct connection allows pricing which is competitive with traditional OEM lead-acid batteries, and lower than any other lithium-based alternative.

How does the LFX "PbEq AH" capacity rating compare to lead-acid Ah ratings?

First, we need to understand that the primary job of a starter battery is to flow a large current (amperage) for a short time, in order to start a vehicle. In order to do that efficiently, the battery must have low internal resistance. In very simplified terms, the larger the battery is in capacity, the lower the resistance of that battery is, and the better it can crank a vehicle under high loads.

Lithium Iron Phosphate batteries are a completely different chemistry. Not only do they have less than 1/3 the internal resistance per capacity than do lead-acid, they are also the ultimate "deep-cycle" battery. The internal "completely discharged" capacity of a Shorai battery is 1/3 the rated "PbEq" capacity. For example, the LFX18 12V series have 6Ah cells internally. But the cells are capable of 90% discharge without damage and while retaining more cranking ability, compared to roughly 30% for lead-acid. As such, the USABLE capacity(or "reserve capacity") of an LFX18 12V battery is the same or better than a 18AHr-rated lead acid battery, while providing superior cranking performance and a vast reduction in weight. The Shorai PbEq AH (lead-acid equivalent) rating system therefore allows users to compare a very different technology from lead-acid, but to still compare “apples to apples”.

Can Shorai LFX be fully discharged and then disposed in regular garbage?

That depends on your municipal regulations. Shorai LFX batteries meet the European RoHS standards for environmental health, and contain no lead. Check with your local authority to see if LiFePO4 batteries are allowed. If so, fully discharge the battery before disposal, using a 12V light bulb until no longer lit, for example. We expect that there will also be recycling available in some locations, and more coming in the years ahead.

Can Shorai LFX be mounted in any position, even upside down?

Yes because there are no liquids in Shorai LFX batteries.

How long will my LFX battery last?

That depends on many factors. Under the worst abuse, a lead acid battery may last only a few months and under the best about seven years, provided the consumer utilized proper battery care and maintenance. In between there is a wide variety of experiences. Research indicates an average of about 2 1/2 to 3 years lifespan for lead-acid. This is for many reasons, but almost exclusively it is related to use and storage techniques.  Under the same average usage conditions, Shorai batteries are expected to last roughly double, or 5 to 6 years. And in ideal usage and storage conditions 8 to 10 years should be achievable.

Can I charge my Shorai battery with my regular charger?

Yes, so long as you do not charge it at an amperage above the listed recommended charge rate.  A Smart battery charger will charge your Shorai battery up to a correct level in a safe manner.

2 people commented,
This article is rated out of 5
Read blog in RSS news reader with RSS. Read blog using Feedly